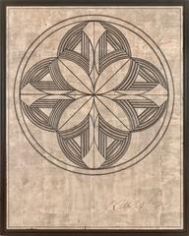 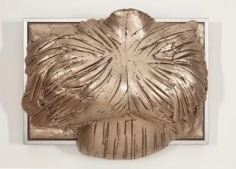 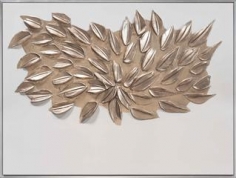 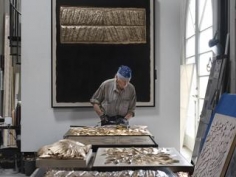 In his sixth solo exhibition with Callan Contemporary, abstract painter and sculptor George Dunbar presents a new body of work revisiting many of the stylistic periods that have made him an esteemed figure in modern and contemporary art. Alternately gestural, hard-edged, and Baroque in character, the series included in the exhibition— Coin Du Lestin, Rouville, Bonfouca, Surge, and Marshgrass—bear the unmistakable aesthetic thumbprint that makes each piece instantly recognizable as his own. A common thread uniting these artworks is Dunbar’s use of moon gold, hence the show’s title. “Moon gold is a hammered leaf that I have been using for years,” he explains.“ Its warm, almost beige hue comes from a combination of palladium leaf and a small amount of silver alloy, which allows it to very lightly tarnish and which actually gives it the warm patina. As I started developing a concept for this exhibition, I thought it would be a great way to show a variety of the different periods of my career and yet still give the show a cohesive feel.”

Dunbar’s groundbreaking, seven-decade career began with his studies at the Tyler School of Art at Temple University (Philadelphia) and the Grande Chaumière Academy in Paris. During the heyday of Abstract Expressionism he was active in New York City, exhibiting alongside the illustrious AbEx painter Franz Kline in 1953. His work has been enthusiastically reviewed in publications such as The New York Times, Art in America, and ARTnews, and has been acquired into prestigious private, corporate, and institutional collections, among them the permanent collection of the Whitney Museum of American Art, The British Museum (London), New Orleans Museum of Art, Ogden Museum of Southern Art, and North Carolina Museum of Art. He has also played a formative role in nurturing modern art in the American South, beginning in 1957 when he co-founded Orleans Gallery, the region’s first artist co-op and an influential hub for contemporary abstraction. He has been honored with career surveys such as Dunbar: Mining the Surfaces (New Orleans Museum of Art, 1997), George Dunbar: Southern Masters Series (Ogden Museum of Southern Art, 2007), Earth and Element: The Art of George Dunbar (Hilliard University Museum, University of Louisiana at Lafayette, 2014), and George Dunbar: Elements of Chance (New Orleans Museum of Art, 2016-2017).

He is renowned for his mastery of gesture, materials, and process, in particular his paintings’ seamless surface transitions, which he executes with masterly precision and control. Counterbalancing an impeccable, perfectionist technique with an appreciation of the spontaneous inspiration he calls “the accidental triumph,” George Dunbar creates objects of unparalleled nuance, elegance, and beauty.