A Little Bit of Sunshine

Between Darkness and Light

Emotion Revealed takes you on a journey into St. Pierre’s emotional world and how she connects with and communicates feeling with color. Color has an interesting way of creating specific emotion and for St. Pierre, it’s in this vulnerable space that her mood and emotions are often revealed by the vivid color combinations used in her work.

Whitney’s unique abstract pieces are a balance of color, pattern, and texture. Self-taught, Whitney began to paint works for her own walls after her time at Auburn University. In 2018, Whitney earned national recognition when the popular clothing line, Dramer James, commissioned her to paint for their summer back-to-back school campaign. Whitney’s art has also been featured in Southern Living magazine and numerous times on HGTV’s Property Brothers and Listed Sisters home improvement shows. Her vibrant and colorful combinations are a favorite among her collectors.

Whitney and her husband Stephen, originally from New Orleans, live in Nashville TN with their two daughters. 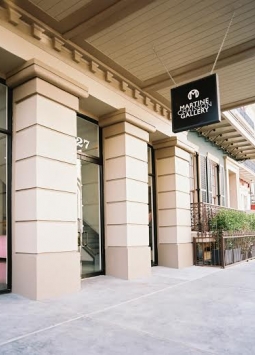