The Arthur Roger Gallery is pleased to present an exhibition of new artworks by Dale Chihuly. The exhibition will be on view at Arthur Roger Gallery, located at 432 Julia Street, from April 6 – June 22, 2019. The gallery will host an opening reception on Saturday, April 6 from 6 – 9 p.m. as well as an exhibition walkthrough with Chihuly Studio President and CEO Leslie Jackson Chihuly on Thursday, June 6 from 6 – 7 p.m.

Beginning Saturday, April 6, the Arthur Roger Gallery will present CHIHULY, an exhibition of new artwork by Dale Chihuly, the world’s preeminent glass artist. The exhibition, which is designed by Chihuly specifically for installation throughout both the 432 and 434 Julia Street gallery spaces.

CHIHULY features the spectacular site-specific installations the artist is known for, including a 22-foot Persian Ceiling and Chandeliers, as well as selections from his most recent series Glass on Glass, and Rotolo—his most challenging sculptures to
date.

Having worked with Chihuly over several years coordinating the exhibition Arthur Roger stated, “I’m impressed with the immense attention to detail and careful planning that everyone has contributed in order to bring Chihuly’s latest artistic vision to New Orleans. This is the most ambitious exhibition in the
Gallery’s 41-year history”. Dale Chihuly is credited with revolutionizing the studio glass movement and elevating perceptions of glass from a functional medium to a spectacular art form.

Born in 1941 in Tacoma, Washington Dale was introduced to glass when studying interior design at the University of Washington. After graduating from the institution in 1965, he continued his glass studies at the University of Wisconsin, receiving an M.S. in 1967, and at the Rhode Island School of Design where he was awarded an M.F.A. in 1968. On a Fulbright Fellowship in 1968, Chihuly worked with glass masters in Venice, and in 1971 he co-founded the Pilchuck Glass School in Stanwood, Washington.

Dale Chihuly has been the recipient of many awards, including thirteen honorary doctoral degrees, a Louis Comfort Tiffany Foundation Grant (1967), a Fulbright Fellowship (1968) and two National Endowment for the Arts Fellowships (1975, 1979).

Chihuly’s work is included in more than 200 museum collections worldwide, including The Metropolitan Museum of Art, the Smithsonian American Art Museum, and the Corning Museum of Glass. Major exhibitions include Chihuly Over Venice (1995-96), Chihuly in the Light of Jerusalem (1999), de Young Museum in San Francisco (2008), the Museum of Fine Arts, Boston (2011), Virginia Museum of Fine Arts in Richmond (2012), the Montreal Museum of Fine Arts in Montreal, Canada (2013), the Royal Ontario Museum in Toronto, Canada (2016), and Crystal Bridges Museum of American Art in Bentonville, Arkansas (2017). In addition, Chihuly Garden and Glass, a long-term exhibition, opened at Seattle Center in 2012. For more information, visit chihuly.com 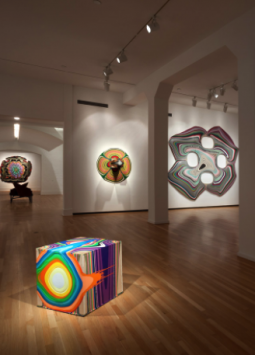