At a Bend in the River

For May, graphic artist Terry Kenney explores New Orleans neighborhoods. Kenney's delights in the precise detail of New Orleans beloved building type, The Shotgun. Whether single, double, camelback or other Arts and Crafts adaptations, New Orleans has the largest stock of historic shotgun houses.  It is an efficient use of space found throughout the South, and its popularity is most likely due to its ability to place a lot of people in a small amount of space. According to Robert Cangelosi, The first located usage of the term in local press occurred when a New Orleans’ newspaper wrote on April 15, 1917, “Thereare hundreds of what is locally known as ‘shotgun houses’ in New Orleans. They are called shotgun houses because you can stand in the front door and shoot the dinner off the stove in the kitchen.”

Terry Kenney is a New Orleans native. She was the Director of Graphics at Audubon Zoo, designing exhibits and graphics for Audubon Zoo, the Aquarium of the Americas, and the Audubon Insectarium. She holds a degree in Education from the University of New Orleans. She studied commercial art at Delgado Community College and Fine Art at the New Orleans Academy of Fine Arts. Kenney is a superlative draftsman, with a fine eye for detail. Urban realism is her artistic niche, excelling in exacting elevations of New Orleans distinctive architectural styles and industrial views. Locked &amp; Loaded is online at Gallery 600 Julia or by appointment. 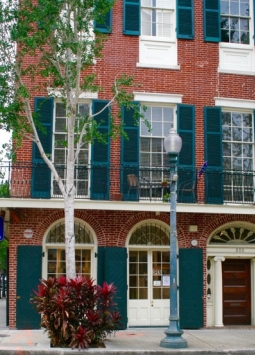