Beverly Alomepe’s love affair with crafting arose from a fascination with Cameroonian wax textile patterns and drawing with symbols from a young age. Her medium is decorative paper cutting, which doubles as paper doll installations and stencils for 2D drawings and paintings. Her work explores visibility, invisibility, and often encapsulates the feeling of institutional racism on the pan-african community. Her suspended paper cuts or “paper doll installations” center on themes of visibility, invisibility, and intend to be a reflective commentary on how identity is perceived in the western world. Josiah Daniel Gagosian creates work that functions as a spiritual and philosophical inquiry, adapting ideas from a broad variety of sources, from the mythic and literary, to the autobiographical. He seeks to harmonize paradoxical elements in service of higher knowledge and consciousness. Genealogical explorations of his unusual familial heritage (Ottoman Armenian refugees who had converted to Mormonism, Mexican-Americans from the Arizona border, Scandinavians, and Celts) have provided him with a wealth of photographs, religious and cultural motifs, and conceptual material.

He views this personal examination as an idiosyncratic path to the universal, the limbs of his family tree branching through time and space to intertwine with the whole of human history. Combining both ancient and modern traditions, he creates esoteric liminal spaces in his paintings as a means of arriving closer to a truth that unfolds beyond the reach of material reality. He views his task as a mystical one, a divine, even futile, attempt to make work that serves as a vehicle to the other shore of human consciousness. Barbara Kuebel’s works are driven by spontaneous energy, nervousness and an attitude that “cannot wait”. Her themes are inspired by the dynamics of crowd and group behaviors. She is specifically interested in how peoples' experiences within "social" situations such as a queue can be transmitted into drawing and graphics. Her works are full of action and felt movement and want to tell stories of emotions without words. She is also a playful person who likes to dig into experiments and new directions for her work. 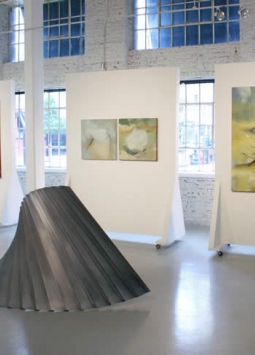