Acrylic, paper and pencil on caqnvas

Oil and mixed media on linen

Ryoko Endo was born into a traditional family in Fukushima, Japan and attended a Catholic mission school. As a child, her mother encouraged her to wear a glove on her dominant left hand so that she would learn to use her right, as it was thought that left-handed children brought shame onto a family. Because of this experience, she can equally paint with both hands. Upon moving to New York City in 1994, one of her instructors was second-generation Abstract Expressionist painter Kikuo Saito. Saito inspired her to create colorful abstract paintings, which continues to be her focus today. Endo studied graphic design and typography at Musashino Art University in Tokyo and then furthered her studies in painting at the Art Students League, NY. She has exhibited extensively throughout New York in both solo and group exhibitions and in 2015 she received a Trudy and Henry Gillette Painting scholarship.

Betsy Eby fuses the line between the musical and the visual composition. A classically trained pianist, she seeks in her work what Rothko described as “the place where music lives.” The layers and gestures of her paintings evoke musical spaces and rhythms while drawing on patterns found in nature. From her early childhood, musical and natural rhythms blended in Eby’s sensibility. Her work reveals that interconnected sensitivity: her delicate, organic compositions become synesthesias of sound and image. Eby received her BA from the University of Oregon and splits her time between studios in Columbus, Georgia and Wheaton Island, Maine. Her work has been exhibited widely throughout the United States and is included in several collections including the Tacoma Art Museum, WA; the Columbus Museum, GA; the Georgia Museum of Art, Athens, GA and United States Embassy in Dubai.

Diana Greenberg’s abstract color field paintings are meditations on rhythm and color found in nature.  Her intuitive process begins by taking inspiration from striking color combinations found in her immediate environment, ranging from landscapes to a particular plant or figure. Through the construction and deconstruction of these colorful forms, each composition becomes unrecognizable to its source, yet essentially linked back to nature. Equally important to the composition is the use of negative space, which give breath to the cluster of gestural marks she creates. Greenberg was born in Dallas, TX, and currently lives in Austin, TX. She received her BBA from The University of Texas in Austin, TX. She has shown at Wally Workman Gallery, Austin, TX; The Contemporary, Austin, TX; Octavia Art Gallery, New Orleans, LA; the Geovinsky Gallery of Contemporary Art, Denver, CO; amongst others. Her work is included in the several corporate collections, including Memorial Sloan Kettering, Sabine Oil and Gas, The Fairmont Hotel in Scottsdale, AZ and the South Congress Hotel in Austin, TX.

Chris Hayman creates paintings with vivid contrasting color and thick painterly textures. She is interested in how the painted forms are energized by the space around them. Inspired by the natural world, she believes in a process of constant investigation. Trained early on as a classical pianist, Hayman has been greatly influenced by music, which is constant in her studio. Hayman was born in New York City. She received her BA in Art History at the University of Maryland and a second degree in Art Education at the University of Reno, Nevada where she started her investigation in painting. Hayman has had a continuous exhibition history, showing in galleries throughout the country, most notably in Washington, DC; Boston, MA; New Orleans, LA; Park City, UT; Dallas, TX; and Houston, TX, among others. Her work is included in the numerous private and corporate collections. 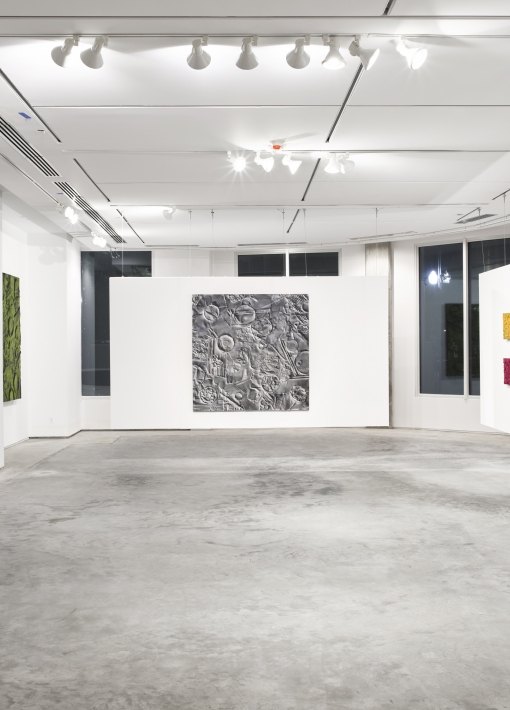