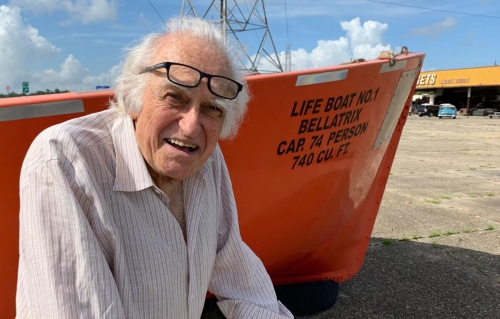 In late June, New Orleans artist Robert Tannen spent $6,000 to purchase a retired 30-foot lifeboat. The hazard-orange vessel was built to hold 74 crewmen, in case their freighter sank beneath them. Tannen found the boat for sale in the parking lot of a movie industry prop shop in Slidell.

He plans to have the three-ton metal and fiberglass vessel towed to the 600 block of Julia Street, where he’ll put it on display as a ready-made sculpture during Hancock Whitney White Linen Night, Aug. 3. The street party annually draws thousands of fashionably white-clad art lovers to New Orleans’ warehouse district. Delivering the boat to the one-night event and removing it afterward will cost another $1,000.

Calling an unaltered second-hand lifeboat a work of art might seem like a stretch. But Tannen is inured to incredulity. In the past he’s produced other eyebrow-raising artworks, such as a gigantic stuffed swordfish that he hung from the porch of his two-story Esplanade Avenue house; a stack of wooden picnic tables that he erected on the Poydras Street neutral ground, and four enormous boulders trucked in from Arkansas that he arranged on Lee Circle at the four points of the compass.

Tannen isn’t the first artist to declare ordinary objects works of art; the tradition dates back roughly a century. But Tannen’s work has always been focused on the Crescent City.

And though he's accustomed to the head-scratching his work often provokes, in the case of the lifeboat project he wants his intentions to be clear. Those interested in its ominous implications can discuss it with him during White Linen Night. He’ll be easy to spot: The bespectacled 82-year-old artist plans to don swim trunks and an eye-catching scarlet lifeguard shirt for the event.